Plaid is his print

Posing at a deli

Garrett has a huge social media presence and is quite active on all his platforms. Add to his number of followers, fans. 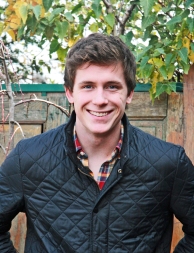 The words preppy, waspy and plaid immediately spring to mind when describing Garrett. That’s not to say he can be summed up with just three words, but those three most certainly suit Mr. McCarthy as I can easily picture him conducting his daily routine in some preppy east coast enclave reminiscent of the back drop of a glossy Ralph Lauren advertisement, be it Nantucket, Greenwich, Connecticut or Newport, Rhode Island. The truth is Garrett is actually a well mannered, even keel, down to earth guy from the Midwest (Do they make them any other way out there?). Also, the guy may dress preppy, but he does it in a way where he doesn’t take that label too seriously and where it comes across as relaxed, urban, classic and not a caricature. It’s what suits him, he wears it well and to each his own.

Garrett is a man of many hats. His varied interests include history, technology, religion and philosophy, he’s a voracious reader of books, has a head for business and has impressive taste in restaurants for someone relatively new to the city. He works part time as an EMT for Central Park, is also a fire fighter and takes great pride in his ability to save lives. He studied development neuroscience at an all male university, yet has a strong passion for design and menswear, as he appreciates the aesthetic of men’s clothes. He is currently working on building his own label/menswear line entitled Fargo Boulevard, with a slow roll out beginning with ties, while he’s also on his way to interning at a reputable design house where he hopes to learn more about the craft and trade he clearly has an eye for. A blog that he publishes – Goodpeoplegofar.com, focuses on architecture and design that he connects to apparel, since he states that “clothing is architecture that you wear”. His aesthetic taste leans towards older, heritage or classic brands with an emphasis on academia. His other part time job at the Gant Rugger store in Nolita connects him to two men he admires in men’s fashion – Christopher Bastin, creative director of Gant and Michael Bastian who designs an eponymous line for Gant.

Shooting Garrett has been a breeze, since he has done some modeling, I just let him do his thing – a smile here, a lean there and literally the rest takes care of itself. The one thing I did notice in editing his shots was that he possesses the ability to look youthful and slightly baby faced, yet at other times more mature, smoldering and a bit of a matinee idol from the 1950’s. As I mentioned above, plaid is one of his signatures. He even jokes it’s his favorite color. I did make a reference to him in an earlier post a few weeks back about how I was discussing shooting him in something other than plaid, but he declared he loved it so. I get that, as he was preaching to the choir, since he and I could have a plaid contest to see who owns more, though something tells me he might edge me out a bit, but not by much.

Garrett will be featured in the blog periodically. Check back later this afternoon for another post on him.

Check Garrett out in Time Out New York: http://www.timeout.com/newyork/shopping/street-fashion-with-ehren-david-edralin-masculine-manhattan-blogger